Thank you very much for giving me the chance of talking to you about the Jewish connections in my family.

It will be a very personal report for which I tried to remember as much as possible of what the different members of the family told me, of what I overheard when I was a child and of my own experiences, of course.

One of the two women was my mother, a Christian German, the other was Aunt Ilse, a Jewish German.

Both women were born in Silesia, in the east of Germany, my mother in 1897, my aunt one year later.

My mother had 5 brothers, 3 more children died in their early childhood. Her father worked in the post-office, he was the only bread-winner in the family and the strict authority in the background, as I was told.

His wife was the heart of the family whose words were respected and obeyed by the children. She was kind-hearted, strong and strict, but modest at the same time. She was the centre of the household, working from morning to evening, always trying to make both ends meet, even sewing her sons’ trousers until they were 14 years old. Fortunately for them she had learnt to be a tailor.

My mother who was the 3rd eldest child had to help her in the household when school was over at noon, and it was evident that this went on after she had left school at the age of 14, but then it was a full-time job for her.

She had always wished to become a teacher, but as money was shod and her mother needed her at home, the girl had to stand back behind her brothers, and she obeyed. I think she must have been disappointed, but she never really complained about her parents’ decision.

My aunt had one sister, and her parents, Mr and Mrs Kohn owned a shop where they sold all kinds of cloth and anything you need for sewing. It must have been a well-running business because my aunt talked to me about some trips she had made together with her mother. Both were fond of going to cafes where they could see elegant and interesting people. My aunt, as well as her mother used to wear elegant clothes, always tailor-made, and I was given the impression that her father could easily afford fulfilling his wife’s and 2 daughters’ wishes.

I think her family had almost assimilated as so many others, though I am not sure, at least I have never been told anything about any special customs at home. 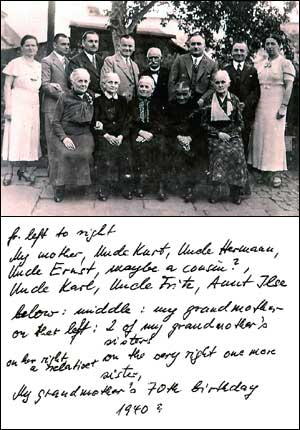 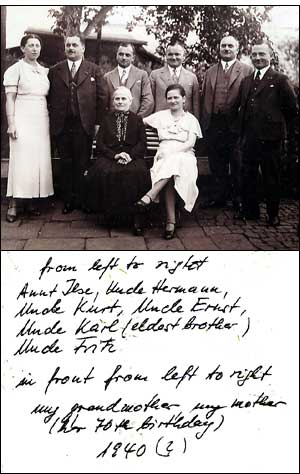 One day, I don’t know any details about it - my uncle met Ilse Kohn, they fell in love with each other and wanted to get married.

So both of them had to inform their parents and to ask for permission to introduce each other to their families.

But both families were not very enthusiastic about their daughter’s respectively their son’s idea to marry each other and did not want to give their assent, though the young people must have talked very seriously and decidedly to them.

So one day Mrs Kohn took the train and went to Stratton,the town where my grandparents lived. She came to see my grandmother and as I was told by my aunt and by my mother - both mothers sat there sadly talking together about their children and weeping together for their foolishness, for the mishap that they had fallen in love with each other and their unreasonable wish to get married. Both, being strong characters, agreed to try to convince their children to give each other up and to find a Christian wife and a Jewish husband some day. And as a matter of fact they were partially successful for a short while.

My aunt told me that she had left home then. She went to Berlin and started to work in a Jewish household to earn her living. But this did not work well. My aunt was not treated in the way she had expected and was accustomed to and furthermore she felt she still loved my uncle too much to be able to live without him and so she returned home.

Both, being strong characters, agreed to try to convince their children to give each other up and to find a Christian wife and a Jewish husband some day.

The two young people met again, decided to marry and to stay together until the end of their lives, what they actually did.

Strange enough for me today, when I try to remember, I noticed I have never been told anything about their wedding ceremony, nor do I know if the two families met to celebrate this day together. Nothing has ever been mentioned to me except for the fad that they got marred.

Aunt Ilse was the first daughter-in-law and the first sister-in-law in the family and I think she was fully accepted as a member of the family because my mother used the little word “our’ together with her name, she said “our Ilse when she mentioned her just as she also said “our Fritz” or “our Ernst” when speaking of her brothers.

My aunt was accepted in the family, but I doubt if she was really welcome, a fact she must have felt sooner or later.

Soon they found out that my aunt was different from them, they were surprised and found her difficult. Maybe my mother was even disappointed, perhaps she had hoped to find a sister who resembled her.

Today I think my mother’s family was naive and inexperienced in social contacts and in communicating with people living outside their own world. They were good-hearted, they firmly believed in God, but they were not very open-minded. They enjoyed the harmony in their family and tried to preserve it.