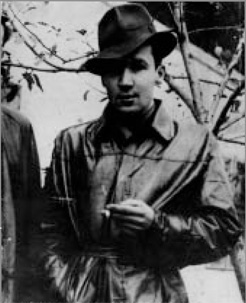 We drove from Zakopane, Poland to the nearby town of Nowy Targ on a warm August morning, eager to meet rescuer Jerzy Bielecki for the ﬁrst time. Jerzy is somewhat famous at the Auschwitz-Birkenau State Musuem, because he was one of the few prisoners who managed to escape successfully from the camp in July 1944 with Cyla, the Jewish girl with whom he had fallen in love. When we pulled up to his apartment, Jerzy was at the third ﬂoor window watching for us. He waved as we got out of the car, and we quickly walked up to his apartment.

Jerzy greeted us warmly. He is a charming and vivacious man and amazingly robust for 84 years old. He lives alone in a small walk-up apartment; his wife passed away a few years ago. Jerzy made tea for us and we sat down to talk. Jerzy said how grateful he is for the JFR’s support, which he has been receiving since January 1997. He uses the funds mainly to pay for home heating fuel and medication. He told us to pass on his thanks to everyone in America for helping him. I invited Jerzy to meet with our Alfred Lerner Fellows in July 2006 when we are at Auschwitz during the European Study Program. He was touched by the invitation and has already put it on his calendar. The educators who join us will no doubt be moved and inspired by Jerzy’s story.

AUSCHWITZ , POLAND… SUMMER 1944 – Jerzy Bielecki was in the ﬁrst transport of Polish political prisoners that left Tarnow, Poland for Auschwitz on June 13, 1940. Upon arriving at Auschwitz, Jerzy was given number 243. During his more than four years as an inmate at Auschwitz, Jerzy worked in several places, including the grain warehouse. There he met and fell in love with Cyla Cybulska, a Polish Jew. Although men and women were not allowed to communicate with each other, Jerzy and Cyla were able to exchange a few words every day. During the winter of 1944, Jerzy decided to attempt to escape from Auschwitz. He begged Cyla to join him. “You are the only one left in your family,” he told her, “maybe I can save you.” Cyla’s parents and brothers, who had also been deported to Auschwitz, had already been murdered. Although she initially did not take Jerzy seriously, she eventually decided to join him. Over several months Jerzy made the necessary arrangements by securing food, documents, clothing and shoes for Cyla, and an SS uniform for himself.

On July 21, 1944, Jerzy, dressed in the stolen SS uniform, arrived in the laundry room where Cyla worked. He told the SS woman in charge that he was summoning Cyla for interrogation.Together they began walking through the camp. As they approached the guard house, an SS guard stopped them. Jerzy showed him a stolen pass authorizing one guard and one prisoner to return to a nearby work farm. The guard let them through. At this point, Jerzy and Cyla had passed the guarded area of the camp. They were still in grave danger, however, because they both had camp numbers tattooed on their arms that would have easily identiﬁed them as Auschwitz escapees. Capture by the Germans would have meant certain death.

They walked for ten nights, hiding in the ﬁelds during the day. Cyla and Jerzy eventually reached the home of one of Jerzy’s relatives. They stayed there for several days. In one of the towns that they stayed in, Jerzy coincidentally reunited with his brother, Leszek, a member of an underground resistance movement, and Jerzy decided to join the underground. Jerzy found Cyla a permanent hiding place with a Polish family. They lost contact, and when the war ended, each assumed that the other was dead.

After several years, Cyla married and moved to the United States to ﬁnd some distant relatives. Jerzy also married and remained in Poland. In 1983, Cyla learned that Jerzy was still alive and traveled to Poland to visit him. Jerzy greeted her with 39 red roses, one for each year they were apart. Following their reunion, Cyla and Jerzy saw each other ﬁfteen more times, until Cyla died in February 2005. Jerzy is 84 and lives in Nowy Targ, Poland.