Internships are great for landing jobs or grad school spots after you earn your degree, but they offer another immediate bonus: they can help you figure out what kind of work you might like to do.

Lexi Palmer, a senior English major who is studying both literature and creative writing, has discovered that her internship at a local indie book publishing company has opened her eyes to new career possibilities – and so has working from home, as Keene State students, professors, and staff are all doing while we shelter in place.

Lexi has always wanted to be a writer, and has earned both a writing award and a summer fellowship for her fiction, poetry, and essays. But her time at Bauhan Publishing, just down the road from Keene in Peterborough, New Hampshire, also has her interested in the business end of writing.

She likes editing, and likes the idea of helping other writers turn their good manuscripts into great ones. Already a copyeditor for the student newspaper, The Equinox, she’s interested in learning more about other kinds of editing styles.

Before the pandemic sent all Keene State courses online, a freelance writer, Melanie Plenda (who is also supervising Keene State interns this semester), came to talk to Lexi’s internship class. At the time, Lexi dismissed the idea of working as a freelancer, because she didn’t think she’d be able to work entirely from home. But now that she’s been working from home, both for the Bauhan Publishing internship and for her coursework, she realizes that freelance writing and editing is a possibility for her.

She does miss going to the Bauhan office, but is happy to be continuing her work for the company from her family home in Bow, New Hampshire. She recently finished a project involving a forthcoming collection of letters written by the noted poet, novelist, and memoirist May Sarton (1912-1995) to a dear friend, Joan Jansen. Lexi digitized the letters, which were mostly composed on a typewriter, though some were handwritten.

The correspondence “basically looks at their friendship over the years, and their personal lives,” says Lexi. “May Sarton’s writing is beautiful.”

Lexi has been reading some of Sarton’s poetry from a collection published by Bauhan in 1967, As Does New Hampshire. Now she’s interested in her novels as well, because Sarton discusses the writing process in the letters. “A lot of times what she’s saying is, ‘I hate what I’m writing right now; it’s terrible and no one is going to like it,’” Lexi says. “That sounds like any author that I know.” It’s also a sentiment that Lexi, as a writer herself, finds reassuring. “Even people who are well respected or revered as writers have doubts,” she says.

She’s had the opportunity to post some of Sarton’s poetry on Bauhan Publishing’s social media accounts – another of her jobs is to post a poem from a poet published by Bauhan every day in April, which is poetry month.

In addition, she’s also helped to process entries into the company’s essay collection contest, going through them to ensure that all are anonymous and follow the guidelines before they were sent on to the contest judge.

“We love our Keene State interns,” says publisher Sarah Bauhan, who has worked over the years with a number of students from English Professor Kate Tirabassi’s Writing/Publishing Internship course. “They’re smart and motivated and eager to learn.” 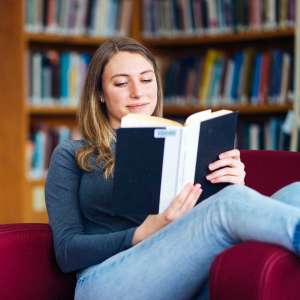 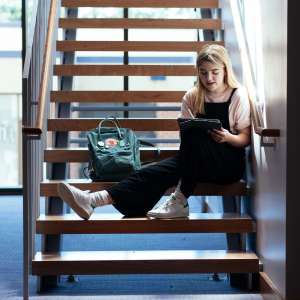