It’s been a big year for Lexi Palmer. The Keene State junior took first place in the Keene Three-Minute Fiction Slam and went on to place third in the statewide slam. She won Keene State’s 2019 Fred Fosher Excellence in Writing Award, a $1,000 prize given to a student who has shown excellence in writing.

And she’s just landed a prestigious Summer Undergraduate Research Fellowship – known around campus as a SURF grant – which provides a $4,000 stipend for a handful of top students to do research or creative work.

In Lexi’s case, creative writing will be the focus of her SURF project. An English major who is specializing in both writing and literature and minoring in women’s and gender studies, she’ll spend the summer writing modern gothic fiction. “The project is to use elements of gothic fiction to explore a 21st-century female perspective, speaking to the female experience. So it’s using those elements – the grotesque, the uncanny – in a new way,” she says.

She’ll start out by doing research – reading gothic novels (Jane Eyre is a big inspiration, as is Frankenstein) along with literary theory, like Freud’s essay “The Uncanny.” Then she’ll be writing a collection of eight short stories, each five to seven pages long.

“I’ve come up with a list of ideas,” says Lexi, who is interested in exploring issues that women deal with in real life, like eating disorders, drug abuse, and sexual assault. Storytelling, she says, she can look at this kind of trauma in a way that encourages conversation.

Lexi, who hails from Concord, New Hampshire, has been writing since she was a kid. “Back in elementary school,” she remembers, “I used to write the dumbest short stories, and my teachers encouraged me so much. My third-grade teacher sat me down and said, ‘If you like writing, keep doing it. Something will come of it if you keep working.’”

And so she has – encouraged, at Keene State, by English professors Brinda Charry, Jeff Friedman, and Mark Long, among others. In addition to writing fiction, she’s recently been working on poetry and essays.

Lexi typically starts a writing session with what she calls a “brain dump,” jotting thoughts in a stream-of-consciousness style. “That gets me into the zone,” she says. But she adds that she’s pretty much always thinking about writing – looking at the ways things that happen in her life might connect in a literary way. “I organize the way I think into a story,” she says. She also keeps a notebook or note-keeping app handy, so if an idea or a nice turn of phrase occur to her, she can write it down.

Lexi is one of two creative writers to earn SURF grants this year. The other, Ashley Rolland, will be completing her second SURF project this summer, writing and illustrating a children’s book. 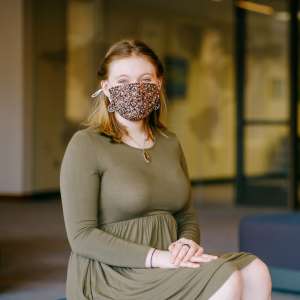 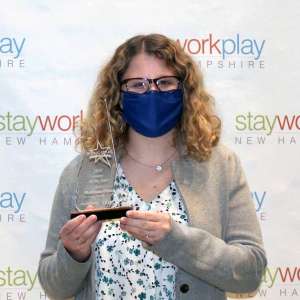