Their Passion for Fair Trade Takes Students to Ecuador

Fair Trade is an international movement that helps farmers and workers in developing countries sell their goods for a fair price, thereby allowing them to make more money and have decent working conditions. There’s strong support for the Fair Trade movement on campus, driven in large part by the KSC Fair Trade Club.

Kathryn McLaughlin, a communications major and sociology minor who will be a senior next year became interested in the Fair Trade Club as a sophomore, and during her junior year, her and her friend Laura Heavey were serving on the club’s executive board as International Trip Organizers. "From the beginning the whole club really wanted to do a service-learning trip based on fair trade, so Laura and I contacted a foundation that we could work with to organize a trip," McLaughlin said. They created applications and selected 10 students who traveled to Ecuador last spring to learn more about fair trade and to see it first hand.

Since the club had worked with Lloyd’s Marketplace in the Student Center and convinced them to carry Runa Tea (a fair trade product, of course), it was a natural fit for the club to work with the Runa Foundation in Ecuador. "When we saw that Runa had a foundation in Ecuador in the Amazon and they grow all the tea leaves there, we wanted to work with them," McLaughlin explained. "When we were in Ecuador we got to see the Runa office and all the guayusa, which is the tea leaf that they grow. It is all fair trade certified and the tea leaf also has many cultural meanings to the indigenous quechua people. So we got to live with these people for five days and learn about their ways. We planted guayusa with them and also helped them make jewelry that was all natural and made from plants and seeds found in the Amazon jungle. The whole trip was an amazing experience and we hope that we can keep our relationship with Runa and the families and go back again next year." 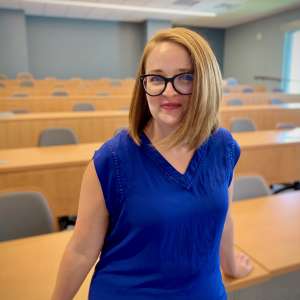