‘Things Just Started Opening Up for Me’

“The opportunity here has been really great for me,” says J. P. Dustin, a US Marine Corps veteran and one of several biology majors funded through a National Institutes of Health NH-INBRE grant to conduct research that could lead to new ways to treat melanoma. “We’ve gone up to Dartmouth to present some of our work, and the people up there have been really surprised at the level of research we’re doing at this lab. It’s not typical undergraduate research we’re doing; it’s more on par with a graduate program.”

Deployed to both Iraq and Afghanistan during his four years in the Marines, Dustin started a landscaping business after he returned to civilian life in 2010. But, he says, “I didn’t really see the future I wanted in it, so I decided to take advantage of my GI bill benefits and enroll in Keene State.”

He’d always been interested in biology, and was soon immersed in lab work. At a larger school, he notes, he’d probably be relegated to assisting graduate students. Here at Keene State, he works directly with professors, doing research that could make a real difference in the world. “I’m really glad I chose to come here,” he says. “Things just started opening up for me – opportunities that I probably wouldn’t get at other schools.”

Dustin and his wife have two young children. His goals for the future include graduate school, but after he gets his Keene State diploma he’ll be looking for work in a hospital or research lab, and plans to spend his free time enjoying his family. His training at Keene State, and particularly the undergraduate research he’s pursued, he says, “has given me the skills to be really competitive for those jobs.” 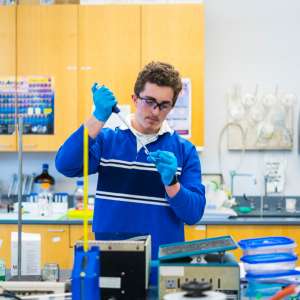