The fact that Mark Miller is a computer science major at Keene State College should come as no surprise. The high-achieving junior from Hillsborough, New Hampshire, became a video games enthusiast growing up and still enjoys the occasional racing pulse and pumping adrenaline that comes from holding a controller in his hands.

Miller has taken his love for computers a step further at Keene State. Going from computer games to computer science, he recently attended the Institute of Electrical and Electronics Engineers (IEEE) Conference in Bridgeport, Connecticut, where he presented his undergraduate research  a system he devised to classify social networks.

Utilizing diagrams, text, and pictures, Miller composed a poster to better illustrate his research. Miller sent his poster to the American Society for Engineering and he was one of a small group of undergraduates selected to present research at the conference. I was surprised that my poster got accepted because its really an engineering conference, said Miller.

Currently hooked on the popular and fast-paced League of Legends games, Miller is also an astute and enterprising student. While attending Hillsboro-Deering High School, he got a jump start on his college career by participating not only in the Running Start program, a partnership between community colleges and high schools that gives students the opportunity to take courses for concurrent high school and college credit, but also in Project Lead the Way (PLTW), which promotes hands-on, project-based science, technology, engineering, and math (STEM) curricula.

”I decided I liked computers my freshman year in high school, said Miller. At first I wanted to just fix computers, but thats really boring so I became interested in network security.”

After looking at some pricier private schools, Miller decided to attend the more affordable Keene State and quickly became a frequent visitor to the Putnam Science Center, where the schools computer science classes are taught.

Always looking to expand his knowledge, Miller hooked up with Dr. Wei Lu, an assistant professor of computer science at KSC. Mark contacted me a year ago and told me about his interest in computer science said Lu. He is really excited to try and figure out and analyze the usage of various social media.

Miller and Lu began collaborating through the Program for Undergraduate Research Experiences (PURE) at Keene State. PURE is an innovative attempt to get more first- and second-year students involved in research on campus. ”I really appreciate the program because it gives faculty members an opportunity to pick out some excellent students to conduct research projects with faculty members,” said Lu. “It’s a win-win situation. Faculty members can train a student to do research work and the student can learn and get knowledge from faculty members.”

Miller feels his research on classifying social networks is long overdue. “In 2008, you could see plain text when everybody posted, but now it’s all in characters and you can’t determine the origination of the information. When you visit social media sites like Facebook and Twitter, the server or network administrator wouldn’t be able to tell what website you are on,” said Miller. “We’re trying to find a way to classify those websites so people can tell what website someone is on.”

The IEEE is the world’s largest professional association dedicated to advancing technological innovation and excellence for the benefit of humanity.

”I had a great time at the conference,” said Miller, whose trip was subsidized through the Student Conference Fund at KSC. I presented my poster for two-and-a-half hours. “It was a great experience.”

“Mark told me he enjoyed the experience very much and his poster was very well received. He had some very nice comments and feedback,” said Lu. “A lot of people were interested in his topic.”

Miller wasn’t the only one from Keene State who made a presentation at the conference. Associate Professor Michael Hanrahan and Dr. Lu presented their paper on bioinformatics, an interdisciplinary scientific field that develops methods for storing, retrieving, organizing, and analyzing biological data.

Miller said he’d like to attend graduate school and would like to work in network forensics. ”Companies like Target and banks like Bank of America are constantly being threatened by hackers looking for information,” he said. “I don’t want to just stop them, but figure out how they did it and prevent it in the future. The problem is, they are probably steps ahead of you already.” 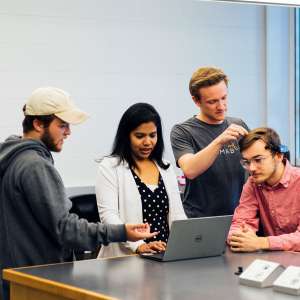 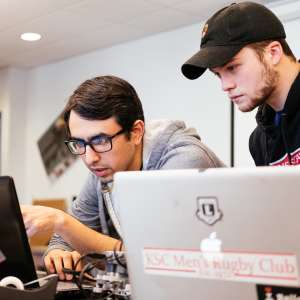 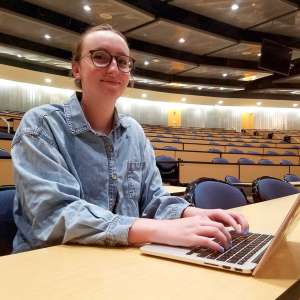