On Sunday, hundreds of runners of all ages will convene in Keene for the 37th running of the Clarence DeMar Marathon. While the majority of runners will go the distance, pounding the pavement for the entire 26.2-mile route from Gilsum to Keene, others will split the distance, opting for the newly instituted half marathon that begins at the Surry Mountain Dam Recreation area. There will also be a race for younger and older runners, who can take part in 1.2-mile kids’ and super-senior races.

Regardless of the distance, all runners will conclude their respective races at Keene State College. Heading down Main Street and under the College’s welcoming archway, runners will cross the finish line on Appian Way not far from DeMar’s original home in Keene. The motto for the day: “Enter to return, go forth to finish.”

It’s appropriate that the DeMar Marathon and the other races conclude at Keene State. Clarence DeMar, aptly nicknamed “Mr. Marathon,” taught industrial education and coached the track team at then–Keene Normal School throughout the 1930s, bringing prestige and fame to the school and area by winning the Boston Marathon seven times.

On Saturday, members of the DeMar family, including DeMar’s daughter Betty DeMar Mueller and granddaughter Dawn Roberts, will participate in a commemorative ceremony unveiling an official finish line marker that was recently installed on Appian Way.

“We look at Keene State as a very critical as well as enthusiastic partner,” said Alan Stroshine, who has served as race director for the DeMar Marathon for three years. “We recently cemented that relationship by having a post installed at the finish line on Appian Way. It’s an ideal way to memorialize the race and Clarence and his connection to Keene Normal School.”

While every race has a finish line, it also has a starting point. The DeMar Marathon was conceived in the late ’70s by two members of the Keene State faculty and staff, Pete Hanrahan ’73 and George Bower. Hanrahan, a former captain of the KSC cross country team and sports information / intramural director and Bower, who was a teacher and running coach, launched the idea for the marathon during a training run. “We got talking about the shortage of marathons in New England and the idea of having a qualifying race for the Boston Marathon in the Keene area,” said Hanrahan, who grew up In Keene.

Naming for the race was a no-brainer for Hanrahan, who came up with the idea to honor DeMar, who had become synonymous with running in the Monadnock area.

Hanrahan and Bower got plenty of help organizing the first DeMar Marathon, which was run in August 1978. Larry Stirling was recruited to help with logistics, while Bob MacKnight, president of Keene Beverage Company, became the marathon’s first sponsor. The pair also reached out to the community, including Jack Mayes, the track coach at Keene High School, the Keene Recreation Department, and Junie Blaisdell, whose sporting goods store helped out with stop watches. It was all hands on deck on race day. “It wouldn’t have worked if we didn’t have a tremendous group of volunteers,” said Hanrahan.

Hanrahan’s dad and Gail Driscoll, who worked at Keene State, were among the many volunteers who staffed the water stops, while Tom Neary, a 1977 KSC grad and an All-New England sprinter, served as the official starters of the race. Paul Bridges and Stan Johnson, who ran for DeMar, took over the starting duties in the early years of the race. According to Hanrahan, about 90 runners ran the first DeMar marathon, paying just a few dollars each for the chance to run on the scenic and generally downhill course. “We had a core philosophy,” said Hanrahan. “We weren’t going to be the biggest or greatest race, but we were going to make every runner feel important.”

The DeMar marathon was one of the first to hand out medals to every runner.

Over the years, the DeMar has gone through its share of changes. The race has been moved to the fall, the course has been modified twice, and several people have taken on the role of race director. When Hanrahan left the area, Jim Michaels, who volunteered to work a water station in 1984 and continued on in numerous capacities after that, took over as de facto race director, becoming the heart and soul of the race for a decade.

Just when the marathon appeared to have run its course, Stroshine and the Elm City Rotary Club of Keene stepped forward to take over the management of the race in 2011. “The Rotary Club was looking for a different fundraiser and I knew the directors of the DeMar were looking at letting it die a natural death,” said Stroshine. “We always thought it was a race that had a lot more potential than it was realizing.” The organization took it over, and, Stroshine notes, “it has grown every year since.”

Since taking over, Stroshine has implemented several changes, including the additional kids’ and super senior races, and restored a few traditions like a spaghetti dinner the evening before the marathon. The DeMar also revamped its website and has taken advantage of social networking. More importantly, the club’s energetic members have formed a strong volunteer base, a critical component of any race.

Stroshine, whose mother, Joanne, was a ’65 grad and master’s recipient three years later, has also reinforced the connection between the DeMar Marathon and Keene State. Besides serving as the finish line for the race, the College offers a welcome respite for weary runners with a quad lined with tents offering everything from a bowl of soup to a massage.

Keene State students have also supplemented the volunteer pool, handling a variety of jobs. Kevin Sherry ’12, a graphic arts student at KSC, designed the most recent DeMar logo, depicting the Appian Way arch outlining a shield that features the silhouette of Demar breaking the finish-line tape.

But the DeMar Marathon is really about the runners, including a strong and dedicated group from Keene State, which has been well-represented in the race over the years. Many, like DeMar veterans Dick Jardine and Ockle Johnson, both longtime math professors at Keene State, have developed a special affinity for the race. Originally from New Boston, NH, Jardine ran his first DeMar while teaching at West Point. “It was like a homecoming for me – an opportunity for me to come and run a marathon in my home state,” said Jardine, who will be running in his 21st DeMar on Sunday. “Some people who really know me think I took the job at KSC so that I could run the DeMar every year.”

“I want to support the local race and I enjoy the course and the people,” said Johnson, who has run the race every year since 2003.

Jardine and Johnson have had memorable marathons. Jardine recalls the time he struck up a conversation with a woman from Connecticut who had been disappointed in her ability to duplicate her faster performances in shorter races. With Jardine’s encouragement, she not only met her goal, but won an award as the second-place female finisher.

One of Johnson’s fondest marathon memories took place in 2010, when he posted his slowest DeMar time while pacing his daughter Maribeth. “I spent four hours talking to my teen-age daughter,” he said. “It was great watching her accomplish what she set out to do.”

Other Keene State faculty and staff have also enjoyed participating in the marathon. Steve Bill, who teaches geology at KSC, ran the race nine out of 10 years, starting in 2001, while Jay Kahn, the College’s vice-president for finance and planning, was able to scratch running a marathon off his bucket list when he ran the race in 2008.

For many, the DeMar was their first marathon. Chris Cusack, a geography professor at KSC, calls the DeMar a gem. “For a city of this size to have such an excellent marathon is really a feather in its cap,” he said. “The organization and volunteers are better than some of the bigger marathons I’ve run.”

The director of academic technology at KSC, Jenny Darrow, ran her first DeMar at the age of 41. “When looking for a marathon I looked everywhere but in my own back yard,” she said. “I wanted it to be this big massive event like the New York City or Boston Marathon. But the DeMar was perfect. I’m glad it was my first marathon.”

Meanwhile, Kim Schmidl-Gagne’s birthday on Sunday, Sept. 28 won’t be your typical run-of-the-mill celebration. A long-time staff member at Keene State currently serving as the Program Manager for the Provost and the Chief Officer for Diversity & Multiculturalism at the College, Schmidl-Gagne will mark her milestone 50th birthday on that day by running in the DeMar - her first-ever marathon.

Several members of the Keene State cross country team went from spectators and volunteers to participants. “When we ran at KSC, we’d always go and watch it,” said Erik Kress, a 1995 KSC grad who recently took over as the principal at the Franklin School in Keene. “I love the course. It’s fast and you’ve got the home course advantage because your friends and family come out to watch you. I always appreciated the small-town image of the DeMar marathon.”

George Adams, a 1994 KSC grad, has been the most successful Owl men’s runner to graduate to the DeMar Marathon, winning in 1996 and again three years later. Adams, who lives in Gilsum, right down the road from the starting line, has run the race 14 times, posting a top-five finish in just about every race, including last year’s.

Olga (Pardo) Kennison, a 1990 KSC grad and former standout soccer player for the Owls, also made a name for herself in the women’s field, winning the Demar in consecutive years (1996 and 1997).

But the DeMar isn’t just about winning. For most, the chance to come in faster or simply complete the course is a just reward. As Jardine noted in a Keene State Today story entitled “Clarence and Me,” Clarence DeMar loved to run and, thanks to Pete Harahan, the College and the city have a beautiful and memorable course for those who share DeMar’s passion and love for the sport.

“I’m just very proud. We started off as an idea and here we are, the second oldest marathon in New England,” said Hanrahan, who will attend Sunday’s race. “It feels good because the race has become an important part of the fabric of the community, the way it has brought people and generations together.” 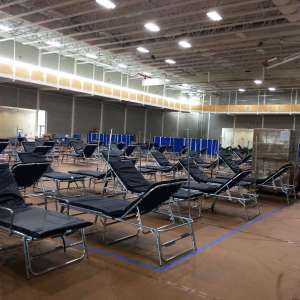